❄ Winter SAVINGS (Nov-Apr): $199 Weeknight | $214 Weekend | $239 Holiday ❄
Summer (May-Oct):  $241 Weeknight | $256 Weekend | $281 Holiday
This remote waterfront cabin is located on a quiet cove on Duck Lake, a gorgeous spot in Haliburton Forest & Wild Life Reserve. This cabin shares the lake with our Willow, Kaya & Big Rock cabins, and is the perfect base camp for cyclists, hikers and paddlers wanting a place to relax and unwind after a day of adventuring in the Haliburton Highlands. In the winter guests can take advantage of the snowy conditions of the Algonquin Dome for an ultimate snowmobile & winter ATVing getaway!
As part of our partnership with Haliburton Forest & Wild Life Reserve, our guests have access to 100,000 acres of wilderness for each day of their stay. Enjoy over 400km of hiking & mountain biking trails right outside your door from April through November, or purchase a snowmobile pass once the snow falls to access these unique, professionally groomed trails throughout the winter months.
Please keep in mind that after Deer Hunting Season in mid-November, this back-country cabin is hike-in or snowmobile/ATV access only. We provide a sled and snowshoes for the hike-in, but please note, this is a challenging ~2 hour hike on rugged terrain. We recommend the hike-in for experienced adventurers only. However, for an additional fee, guests can opt into our shuttling service from mid-November to May 6th to be shuttled to and from the cabin when they check-in and check-out – no hike required!

Activities at this cabin:

We book up to 5 months in advance and open reservations on a revolving monthly basis. April 2023 bookings are now open. May & June 2023 reservations will open February 1st, 2023.

This eco-cabin is completely OFF-GRID. (Don’t let this scare you). Our cabin is modernized and solar powered with electricity and heat. Feel good knowing that you’re choosing a low-carbon, eco-friendly getaway. As an off-grid cabin, energy conservation is key. Drawing too much energy may cause you to lose power, so you’ll need to be mindful of your consumption during your stay. There is a back-up generator when solar power is low.

All garbage and recycling must be packed up and taken home on your departure.

*Please note: Guests visiting us in November should ensure that they have a suitable car equipped with snow tires. Please be aware that early heavy snowfall in early-November may mean that you’ll need to hike into your cabin or book our shuttle. If you opt to hike in, we’ll provide you with snowshoes and a sled (or wagon) to haul your gear. Consider it an adventure!

What makes this location awesome?

This Cabinscape is located in the Haliburton Highlands of Ontario, an area best known for their rolling hardwood forests, pristine lakes and extensive wetlands grounded firmly on the Canadian Shield. From Cove cabin you are just 20-minutes from the main office/lodge at Haliburton Forest with access to their extensive trails, outdoor adventure activities, camp store and restaurant.

When is check-in and check-out?

What is the shuttle service?

From early-December to mid-May this cabin is just over a 3 km hike-in, as the roads are not plowed and can become dangerous due to snow build up (even with a 4WD vehicle). As a result, we are excited to offer a snowmobile/ATV shuttling service for guests who prefer not to hike in, but do not have access to their own snowmobile/ATV. At an additional cost of $100/reservation, guests and their gear will be transported to their cabin via snowmobile or ATV. Please note: the fee includes space for up to three individuals and one cargo sled of gear. Additional guest/gear trips may incur additional fees.

The service runs in 30 minute increments from 1PM-4PM for check-in and 9AM-11:30AM for check out. Guests are able to select their preferred shuttle time through their welcome page which is sent exactly one week in advance of a given booking.

Guest vehicles are permitted on the property up until the end of Deer Hunting Season (mid-November). After that point, until the Victoria Day long-weekend, no guest vehicles are permitted on-site, and must be left in the guest parking area which is approximately 3 km away from the cabin. We do not make exceptions to this policy. Please refer to the “Drive in/Hike in Access” section above for further clarification.

Can I bring my own ATV or snowmobile to access the cabin?

What if I need assistance during my stay?

We are always a phone call or text away for any questions or assistance. Our on-call property manager lives nearby and can be available on-site when needed.

What should I bring?

When is running water shut off?

Our water is pumped from the lake. Running water is shut off when temperatures dip below freezing. This normally happens mid-October but can vary each year.  When running water is shut off, we provide 40L of water for dish washing and drinking. All taps (including shower taps) are turned off. Water is turned back on before the May Long Weekend.

Please note that running water will be shut off on October 15th.

Can I bring additional guests?

This cabin can accommodate up to 4 guests. The base rental rate includes 2 guests. Each additional guest is $25/per night. Please check off your additional guests at checkout.

Is there WIFI/Cell Service?

There is NO WIFI access at this cabin. There is reliable cell reception but this may depend on your carrier. This is a high remote cabin. Access to data may be slow and spotty. Don’t plan on having a Zoom meeting here.

What electronics can I use at the cabin?

There is one outlet in the kitchen for charging your phone and laptop but charging multiple phones / laptops will drain the cabin’s battery quickly. We DO NOT recommend using the outlet for high voltage items like hairdryers, coffee makers, kitchen appliances, etc. This is a low voltage outlet and power outages will result. Health-related items like CPAP machines cannot be accommodated at our cabins. Feel free to reach out to bookings@cabinscape.com for clarification on what machines/electronics can be used at our cabins.

Are there bugs or critters?!

You bet. Depending on the season, you’ll encounter bugs of all sorts. Bugs, rodents and wildlife are a reality of the wilderness. Guests should come prepared with bug spray and proper protective attire. Ticks have also been a major issue across Ontario. Please do your research ahead of time and learn how to properly check yourself for ticks.

While we do our best to protect our cabins from pesky critters by having them seasonally sprayed, critters can sometimes find their way into the cabin. That’s why it’s important to keep your food sealed and stored. If you’re squeamish around bugs or critters, you may want to consider another kind of getaway.

Is this cabin pet friendly?

Yes! You are more than welcome to bring your furry friend for an extra fee of $25/per night. Select the “Pet Pal” option at checkout. One dog per booking is permitted. (We do not make exceptions to this rule). 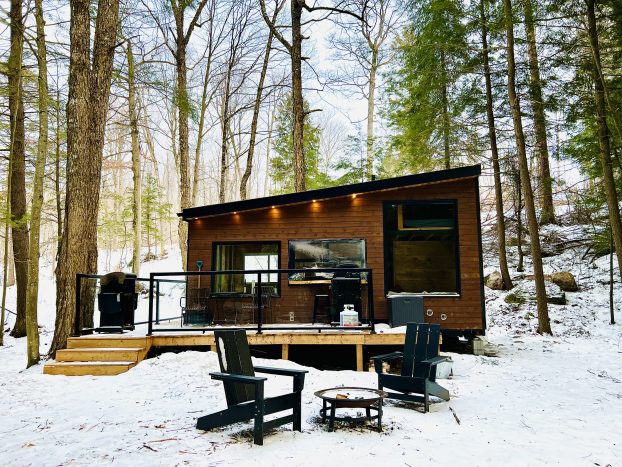 
BEFORE YOU LEAVE FOR YOUR VISIT: Please check this page for updates.

Our standard cancellation policy is in effect. Any guests who have traveled outside of Canada in the past 14 days, have been in contact with infected individuals, or who are showing symptoms of the COVID-19 virus must reschedule or cancel their visit. If you are no longer able to make your booking or feel you are at risk for transmission, please contact us at bookings@cabinscape.com.

To ensure your safety and the safety of the local communities around our cabins, we strongly advise you to gas up and do ALL your shopping BEFORE arriving, and to always wear a mask if visiting  local establishments during your visit.

These are the following safety measures we are taking  to ensure your health and safety:

1: Rescheduling At Risk Guests:
Any guests who have traveled outside of Canada within 14 days of their visit, have been in contact with infected individuals, or who are showing symptoms of the COVID-19 virus should contact us to reschedule or cancel their visit.

2: Intensified Cleaning Protocol
– Our cleaners have intensified cleaning procedures to ensure all surfaces are thoroughly wiped down with disinfectant cleaner
– We are removing sponges and using disposable wash cloths moving forward. While we do not like to contribute to disposable waste, we feel this is a necessary precaution.

3: Following Authorities Recommendations
-We are keeping a close eye on recommendations for health and safety and will adjust our plans accordingly as the situation evolves.

Please note that all of our cabins are in private, wilderness settings. However, some locations are more isolated and “remote” than others. We have a basic scale to grade this in order for you to select a cabin based on your comfort level. Some people prefer the comfort of being closer to people and to civilization while others are looking for a true “back country” style experience.

Our “High” remote cabins are best suited for guests who feel comfortable being alone in the wilderness and who’ve had some experience back-country camping. These cabins are more isolated than the rest. They often require 4WD or AWD vehicles to access as many are located on rugged roads that are off-the-beaten path.
High – Mica, Willow, Kaya, Big Rock, Quasi, Cove & Penner

THIS ACTIVITY WAIVER & RELEASE (this “Agreement”)

IN CONSIDERATION OF the covenants and agreements contained in this Agreement and other good and valuable consideration, the receipt of which is hereby acknowledged, the parties to this Agreement agree as follows:

Details of Activity
The Participant will participate in the following activity: Back Country Cabin Visit.

IN WITNESS WHEREOF the Participant has duly affixed their signatures under hand and seal on: